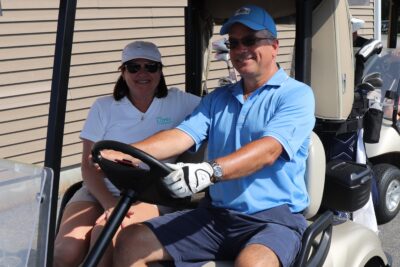 The golf tournament raises funds to support the Jack Rua Camp for Children with Diabetes, a program of the Diabetes Association, Inc., which is an affiliate organization of People Incorporated. With over 60 sponsors, the event raised over $60,000, which will go directly into operating “Camp Jack” each summer.

After registration of the 116 golfers, a strong turnout in spite of showers and storms that dissipated by noon, the day began with a grilled lunch followed by a shotgun start of the scramble tournament. Along with other on-course challenges, the tournament featured two hole-in-one contests: a $10,000 prize sponsored by Rua-Dumont-Audet Insurance Agency at Hole #15 and a free car sponsored by Toyota of Dartmouth at Hole #5.

The 2022 Jack Rua Invitational winning team was Brian Dutra, Steve Hyland, Debbie Dutra, and Linda Hyland, representing The Lopes Companies, a Gold Sponsor of the tournament. From Concord Group Insurance, Matt Rooney was the men’s Longest Drive contest winner while Janna Lafrance took that title for the women. Closest to the Pin contest winners were Linda Hyland (Hole #3) and J. Martin (Hole #17) for the women and Donnie Vezina (Hole #3) and Terry Connors (Hole #17) for the men.

The event ended with a gathering inside the country club, where players bid on a wide array of silent auction and raffle items. In Crestwood’s upstairs dining room, appetizers were served to participants while others helped themselves to the pizza and nacho stations. The Super Ticket raffle winner was Bob Valente who took home a package that included a $50 Amazon gift card and two bottles of wine donated by Brian and Debbie Dutra, along with two vented golf umbrellas from RDA Insurance and Travelers Insurance and one Callaway golf hat donated by Dick’s Sporting Goods.

“While the conditions were pretty unfavorable in the morning of the day of our tournament, we were fortunate not only that the skies cleared, but also because we still had an incredible turnout for the event. It really shows the dedication of our supporters,” said People Incorporated President & CEO Megan Stirk. “We’re very proud of what Camp Jack does for youth with diabetes, and the players and sponsors know that their support goes directly to the children we serve.”

The Diamond Sponsor was D.E.G. Associates.

Located on the grounds of the Boys & Girls Club of Fall River’s Camp Welch in Assonet, Camp Jack serves children with Type 1 diabetes, along with their siblings and friends, and operates for six weeks from July through August. For more information, visit www.peopleincfr.org.